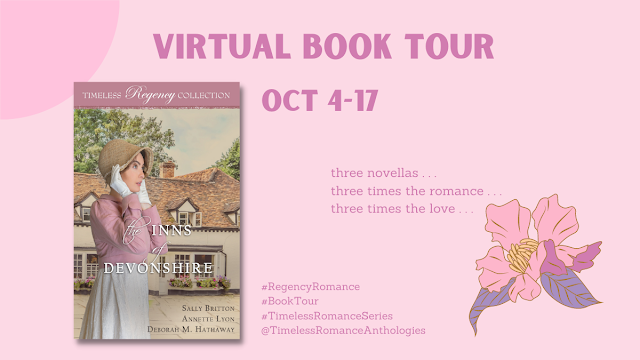 The Inns of Devonshire: Timeless Regency Collection (Book 18)
by Sally Britton, Annette Lyon, and Deborah M. Hathaway
Book Description:
Three novellas, three times the romance, and three times the love . . . in this brand new Timeless Regency Collection
The Seventh Star Inn, by Sally Britton
After years of looking after one another, Susan Baxter and her mother view their neighbors in Totnes as family. When a new landlord inherits the leases on their homes and businesses alike, Susan dreads knowing her world could change at the whim of a stranger. But when she meets Collin Stonecroft and his inquisitive daughter, her feelings shift quickly from cautionary to hopeful. Collin has lived in the confines of London boarding houses all his life, and he’s determined to give his daughter more. They check into the Seventh Star Inn with plans to return to London as soon as possible, but both find Miss Baxter and her local history lessons far too enchanting to leave behind. When Susan learns of Collin’s proposed changes to her beloved neighborhood, will she be able to help him see that some things are perfect the way they are?
The Truth about Mr. Blackmore, by Annette Lyon
Leigh’s life at the Old Grey Inn is drudgery broken by flights of fancy thanks in part to novels by Simon Blackmore. When Mattias McGrady comes to the inn for a fortnight, Leigh captures his attention. A relationship develops, and she dreads the end of his stay, which will mean a return to an unhappy life. An urgent letter to Mattias leads to him inviting Leigh to an event that stands to change both of their lives forever. If all goes well, Leigh will have a life of her choosing after all. But half-truths and lies have a way of complicating matters. When their plans go awry, Leigh loses her reputation and Mattias almost surely loses his career. Can either of them find happiness?
The Coachman’s Choice, by Deborah M. Hathaway
Ever-reliable Mary Thorne has helped her widowed mother run The Golden Mermaid Inn for years. She spends her days greeting guests, ensuring the inn runs smoothly—and dodging flirtatious remarks from passing coachmen. But she’s far too busy to pay any attention to such men, even the enticingly attractive Mr. Northcott. Known far and wide for his horsemanship, punctuality, and dallying reputation, Robert Northcott relishes his life as a coachman, especially his freedom to flirt with numerous women from inn to inn, all without the messy details of commitment. There’s just one woman who's immune to his charms: the lovely, single landlady of The Golden Mermaid. Robert is determined to win Mary over, just as heartily as she is determined to keep her distance from him. But his carefree life is threatened when his perusal of Mary becomes more than just a game.
About the Series:
Since 2015, Mirror Press has been publishing the Timeless Regency Collection, a curated anthology of novellas and short stories set in early 19th century England. Featuring bestselling authors from the historical romance genre, the series has hit the USA TODAY bestselling list and charted at #1 at Amazon.com. Learn more about the series and other anthologies published by Mirror Press at their website.
Review:
Novellas are typically great for when you don't have a lot of time but want to read a quick story, and this latest addition to the Timeless Romance Collection is no exception. The characters were developed well even in the short time of each story, and the relationships didn't feel too rushed. I'm not sure if I've read anything by Deborah Hathaway before, but I enjoyed her story the most out of the three. These novellas have sweet, clean romances, and make for a nice read.
About the Authors:
Sally Britton is a wife, mother, and author who loves the world of romance, received her BA in English from Brigham Young University, and reads voraciously. She started her writing journey at the tender age of fourteen on an electric typewriter, and she’s never looked back.
Sally primarily lives in Oklahoma with her husband, four children, and Izzie the Aussie Shepherd. She loves researching, hiking, and eating too much chocolate.
WEBSITE | TWITTER | FACEBOOK | INSTAGRAM | PINTEREST | GOODREADS | BOOKBUB
Annette Lyon is a USA Today Bestselling author. She's won a Whitney Award (2010) and is an eight-time recipient of Utah's Best of State medal for fiction and short stories. She's the author of more than a dozen novels, even more novellas, a cookbook, a grammar guide, and some 120+ articles. She's worked as a professional editor for publishers and bestselling authors and graduated cum laude from BYU with a degree in English.

Deborah M. Hathaway graduated from Utah State University with a BA in Creative Writing. As a young girl, she devoured Jane Austen's novels while watching and re-watching every adaptation she could. She finds inspiration for her novels during her travels with her English husband to the United Kingdom, where she draws on the beauty of the country in such places as Ireland, Yorkshire, and her beloved Cornwall. Be sure to sign up for Deborah's Newsletter to stay updated on new releases, free and discounted Clean Romance novels, and more!