Blog Tour: The Merchant and the Rogue by Sarah M. Eden 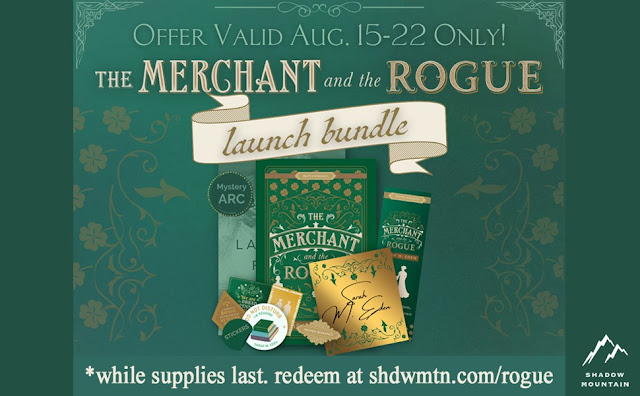 Those of you who want to give this book a try, if you order it during the above dates you will get some extra swag to go with it! Who doesn't love swag?

Vera Sorokina loves reading the Penny Dreadfuls and immersing herself in tales of adventure, mystery, and romance. Her own days are filled with the often-mundane work of running the book and print shop she owns with her father. The shop offers her the freedom and income to employ and protect the poverty-stricken Londoners she's come to care about, and it gives her father something to do other than long for their hometown of St. Petersburg. She is grateful for the stability in their lives, but she often feels lonely.

Brogan Donnelly was born and raised in Ireland, but has lived in London for several years, where he's built a career as a Penny Dreadful writer. He has dedicated himself to the plight of the poor with the help of his sister. His membership in the secretive Dread Penny Society allows him to feel he isn't entirely wasting his life, yet he feels dissatisfied. With no one to share his life with but his sister, he fears London will never truly feel like home.

Brogan and Vera's paths cross, and the attraction is both immediate and ill-advised. Vera knows from experience that writers are never to be trusted, and Brogan has reason to suspect not everything at her print shop is aboveboard. When the growing criminal enterprise run by the elusive and violent Mastiff begins targeting their area of London, Brogan and Vera must work together to protect the community they've both grown to love. But that means they'll need to learn to trust each other with dangerous secrets that have followed both of them from their home countries

Sarah M. Eden does it again! The first Dread Penny Society book I read did take some getting used to with the swapping back and forth between the main story and the excerpts from the Penny Dreadfuls, but now it’s fun to learn a bit more about the characters by things they put in those stories. I imagine it was also a fun challenge for Eden to write the Penny Dreadful stories as they’re not the her typical stories.

I particularly liked the main characters in The Merchant and the Rogue. Brogan and Vera were good, humble people who looked out for others. They made a great team.

The Merchant and the Rogue is an entertaining story and a quick read that’d I’d recommend.

First of all, can we talk about the cover? I am totally in love with the green! It's eye catching, it fits the series and characters, and it's just done well. Next we should talk about Eden's dialogue. She excels at this in all her stories, but I loved the dialogue between Brogan and Vera and Brogan and Moirin. Actually, throw Fletcher in there and anything he says is just fun to read as well. This is a third book in the series, and since I've read the other two I can't honestly say if this book would do well as a stand-alone or not. I have read other reviews of people who started with this book and they said it was fine, so I guess I'll go with that. But I would highly suggest starting with The Lady and the Highwayman because it's just so so good.

The mystery is great, the romance is sweet, and I love that this is not only a story that I can fully enjoy, but one that I can share with my teenage daughter and not worry about the content. I also enjoy the emotion that Eden puts into her characters. You really feel for them, you cheer for them, you want to slap them sometimes. You become invested in these fictional characters and want them to be members of your own family.

Title:The Merchant and the Rogue
Author: Sarah M. Eden
Publisher: Shadow Mountain
Published: August 2021
ISBN: 1629728519
Source: We received copies from the publisher. All opinions expressed are our own.