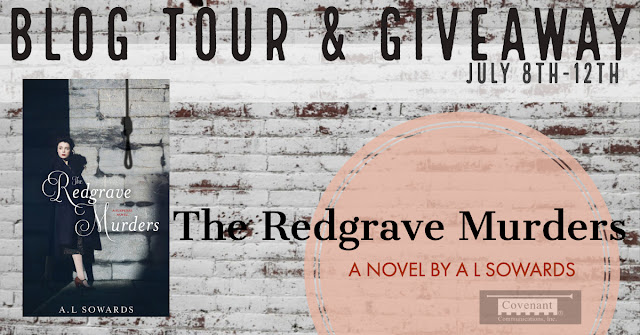 The Redgrave Murders by A.L. Sowards


When her father is murdered, Evie must prove her boyfriend innocent and find the real criminal before he kills again.

Loss is inevitable, as Evie Hampton knows all too well. But despite losing her mother to cancer and her older brother to a war, she knows she's one of the lucky ones. After all, she still has her father, a distinguished professor of medieval history. And she has Gary Redhawk, the man she loves despite the emotional scars he carries from the Second World War--and despite her father's opposition to their relationship.

When Evie's car suddenly careens off the road, she chalks it up to poor maintenance or sheer bad luck making another appearance in her life. Little does she know a host of hardships is just beginning--the car was her father's, and the brake lines were deliberately cut. Someone wants them dead--but why? All fingers point to Gary, a man with a troubled past and no solid alibi, but Evie is unwilling to believe he's involved. Determined to uncover the truth, she begins to piece together a startling picture of deception and vice. But as she closes in on the truth, it is clear that someone is determined to silence her--and the next attempt on her life may be a deadly success.

I have read a handful of A.L. Sowards' books and enjoyed them, but this one was just... wow! I think it was the mix of suspense and post-WWII history that made this story so captivating. There are a lot of books about WWII, but you don't hear much about the emotional trauma that those soldiers had to deal with after they came home. Gary not only had to deal with that, but the trauma that he suffered as a child as well. Even with all of that, he tried his best to be a good person.

I enjoyed watching the relationship between Evie and Gary grow and develop. The romance was a good part of the story, but not the main part of it by any means.

The author did a very good job keeping me guessing until almost the very end on who the bad guy was. I did figure it out before the reveal, but only just. I also enjoy the little history blurbs that the author includes at the end of the book.

This is one that will go on my keeper shelf and I highly recommend it to anyone.

I've really enjoyed every book I've read by A.L. Sowards. She is a very talented author and not only are her war-time novels entertaining, but readers get a good feel for what happened during those horrible times in history.

Sowards' latest novel, The Redgrave Murders, is a bit different from her other novels in that it takes place after the war is over. It was quite eye opening to read about the PTSD that some of the characters went through. It's more common now to hear about these issues, but it seems like it was pretty unusual to hear about it after WWI and WWII. I don't recall ever hearing my grandfathers talk about it.

In addition to PTSD, Sowards addressed interracial relationships and the prejudices in the late forties that people had against Native Americans. It was very interesting and heartbreaking to read about how Gary suffered as a child, as a POW, and as he tried to get a college education.

I really liked that I was kept guessing about the bad guy throughout the story. I thought Evie would have been more distressed by certain events than she was, but she plowed through and proved to be quite the detective.

I can see myself reading this again, and highly recommend it.

Isn't the cover of this book eye catching? I love it. I feel like it captures the era the story is set in, and while it's beautiful it has a sinister feel, which captures the tone of the book extremely well. So, nice job to the cover artists on this one. My kids kept asking me questions about the cover and I had to keep responding that I didn't know! I hadn't read the book yet! Well now that I have I can say that this cover is perfect for the novel.

This was set in such an interesting time period. I haven't read many novels post WWII that discusses PTSD. How devastating to classify these men as psychoneurotic, and to just write them off because they were "crazy". Gary had an even more difficult time because he was Indian and was discriminated because of that as well, and had the crappiest childhood ever. Evie was wonderful to see a person as a person and judge them based on that.

You really feel for Evie and everything that happens to her during the course of the novel. She has to be really strong to combat everything and still remain standing, so to speak. The author creates feelings of doubt, and love, and suspense, and whew...I went through a myriad of emotions while reading this book. The "who done it" is artfully done, and she keeps you guessing throughout the novel.

I will definitely keep reading more from this author, and I will pass on this book to all my book reading friends.