Blog Tour: The Rules in Rome by A.L. Sowards

The Rules in Rome by A.L. Sowards

With Hitler’s forces firmly entrenched in Europe, countless heroes seek to end the madman’s reign. Bastien Ley is one of the best. Working in Italy for the Office of Strategic Services, he’s been tasked with sabotaging German convoys. When his team kills an officer headed for Rome, the man’s similarity to Bastien is undeniable, and seeing an opportunity to turn the tide of the war, Bastien makes a bold decision: he will assume the dead officer’s identity. He becomes Dietrich, an Iron Cross–wearing German officer—an ideal position from which to infiltrate the Nazi ranks in Rome. To help with his stressful assignment, his superiors send him a reinforcement in the form of the lovely Gracie Begni, an intelligent and eager radio operator with absolutely no undercover experience.

With a gulf of resentment between them, these two agents must find a way to portray a couple in love. Soon their reluctant alliance becomes much more as Bastien and Gracie find themselves getting lost in their feelings for each other. But as they engage in battle against the deadliest foe the world has ever known, the pair quickly realizes their love may be doomed. As the Rome Gestapo threatens to destroy all they’ve worked for, will Bastien and Gracie survive their charade?

Wow! The Rules in Rome is an excellent WWII Romance! There is a lot more to it than romance (suspense, action, intrigue, etc.), but I loved the romance.

A.L. Sowards does a fantastic job writing historical fiction. I really enjoyed her characters. Gracie sounded like such a wonderful person. She has low self esteem (thanks to her mother), but she's decided to do what she can for her country. I liked how both of the main characters had been born in Europe, but at a young age had immigrated to the United States.

The journey was very exciting and intense. I love how Sowards is able to depict the horrible war time situation without going over the top.

I was very distraught when my review copy ended before the story was over. I wondered if this was part of a series with a cliff hanger ending. Thankfully, the rest of the story was sent to me (no cliff hangers), and I was very happy with how it ended. I found out that The Rules in Rome is a standalone novel, but the author has plans to write about Bastian's younger brother.

Sowards is an excellent author. I'm excited to read anything else she writes. 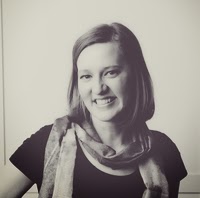 A.L. Sowards has always been fascinated by the 1940s, but she's grateful she didn't live back then. She doesn't think she could have written a novel on a typewriter, and no one would be able to read her handwriting if she wrote her books out longhand. She does, however, think they had the right idea when they rationed nylon and women went barelegged.

Sowards grew up in Moses Lake, Washington. She graduated from BYU and ended up staying in Utah, where she enjoys spending time with her husband and children or with her laptop. She does not own a typewriter. She does own several pairs of nylons.

Title: The Rules in Rome
Author: A.L. Sowards
Publisher: Covenant Communications Inc.
Published: February 2015
ISBN: 1621088820
Source: I received a copy from the publisher in exchange for a review.