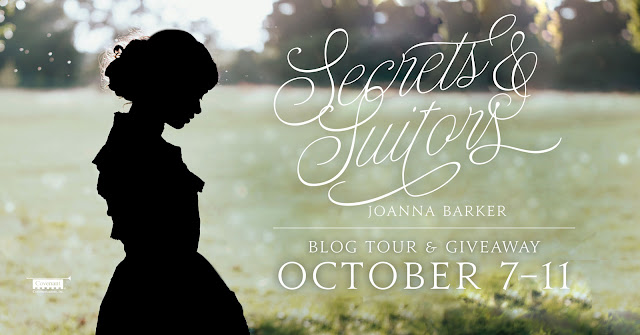 Secrets and Suitors by Joanna Barker

Reluctantly returning to London for yet another Season, shy Nora Hamilton has nearly given up hope that she will ever find the love match she longs for. After all, the one man she does harbor feelings for—her closest friend, James—has made it perfectly clear he views her as just that: a friend. With James traveling half a world away and Nora’s father pressuring her to marry for wealth and status, Nora is forced to set aside her desire for love and accept the future she has always dreaded. Until James returns unexpectedly and Nora’s feelings once again rush unbearably close to the surface. Determined to save what is left of their friendship, Nora ignores her own heart and allows herself to be swept up in the London Season, soon finding herself the object of two very different gentlemen’s affections. Though she should be thrilled, both men come with a glaring fault: neither is the one man who holds her heart.

But there is much more at stake than heartbreak. When long-kept secrets are laid bare, Nora must face the fears that have plagued her all her life and decide what true love is worth.

I was just in the mood for a good regency novel, and Secrets and Suitors checked all the boxes for me. Sweet, check. Clean, double check. Great characters, check. A fun plot, check. A quick read (or one that you don't want to put down so you end up staying up way too late at night to finish because you know you have to get back to the real world in the morning...I'm already cursing that alarm clock. Seriously though, didn't want to put it down) check. Did I miss anything?

The cover of the book is perfect. I love the silhouette, because I will admit sometimes the models on the cover are super distracting because they don't match what I have in my head. But regardless, it's a beautiful cover that screams to be picked up at the store of the library.

My favorite thing about Nora was that she was imperfect, and that while her flaws showed, they were real and you could see that she saw them and was trying to be better. Much of the time authors write these perfect characters that you'd love to be like, but it isn't realistic in any way. I could relate to Nora and her choices...even the bad ones, and that is what makes a great character for me.

I am hoping that more comes from this book. I'd love to see more about Nora's friend. I'd love a little background on Nora's sister, and without a spoiler, I'd like more on another guy too. Again, the mark of a good book when I want more. The book itself was complete and satisfying, but I definitely wouldn't be sad if this became a series.

This was such a fun book to read. I have always been really shy, so I was able to completely relate to Nora. I whole-heartedly approve of hiding behind greenery in order to take a break from the mass of humanity. People can be exhausting! At any rate, I was caught up in the story and was really rooting for Nora to find the happiness she wanted, not the one her parents seemed to be pushing on her.

Multiple characters in the story had several different layers, and just when you thought you really had them pegged, you were thrown a curve ball, completely changing your opinion. I like that I was kept guessing.

Definitely a story I enjoyed. I highly recommend it.

What a sweet story. It’s a story about falling in love with your best friend and not feeling that it’s reciprocated. You try and move on and do what’s best for your family, but then true love conquers all.

I liked the characters. It was a fast read with some touching moments. I really felt bad for Nora. She didn’t think much of herself and didn’t think others could love her. Part of that came from how her parents treated her.

Many relationships were mended throughout the story. It has a very happy ending.

Joanna Barker was born and raised in northern California. She discovered her love for historical fiction after visiting England as an eleven-year-old, and subsequently read every Jane Austen book she could get her hands on. After graduating Brigham Young University with a degree in English, she worked as an acquisitions editor before devoting herself full-time to writing. She enjoys music, chocolate, and reading everything from romance to science fiction. She lives in Utah and is just a little crazy about her husband and two wild-but-loveable boys.

Posted by Andrea Frisby at 8:00 AM